When travelling to a new country being familiar with the local currency can be quite confusing, luckily in New Zealand the transition should be fairly easy as the dollar is a decimal currency similar to the US dollar, British Pound or Euro with each dollar splitting into 100 cents. The bills start at $100 and breakdown into $50, $20, $10 and $5 then we have coins of $2, $1, 50c, 20c and 10c. Just make sure you keep an eye on the exchange rates and you'll soon be able to gauge how much things cost compared to back home.

New Zealand currently uses the New Zealand Dollar but that only came into being in 1967 and before that we had New Zealand Pounds and even that had only been a thing since 1933, before that we were still a British colony and used British Pounds! Today the New Zealand dollar is one of the top ten most traded currencies in the world and makes up about 2% of the daily exchange market world wide.

This article is not about how much things cost or how prices differ from what you're used to back home it is about the hidden stories and meanings on each of our coins and notes. When you arrive in a new country we always think it's interesting to find out who the people are on the notes and why they are there as it could be your first opportunity to gain an insight into the culture and history of the country you're visiting. 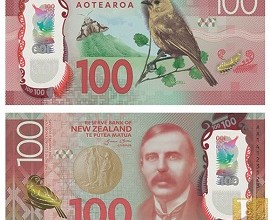 Starting from the top! Our biggest denomination note is the mighty $100 bill! If you're lucky enough to have a few of these in your wallet then good on ya! Like many high value bills these aren't so often used but if you do come across one you'll see an interesting historical figure on the front.

That person is Lord Ernest Rutherford of Nelson, a New Zealand born physicist who became the first person to split the atom and is often referred to as the 'father of nuclear physics'. He won many scientific medals for his work including a Nobel Prize of Chemistry for his work that included the discovery of radioactive half-life and studying the chemistry of radioactive substances.

Another awesome feature of New Zealand currency is that they include a different native bird on each of the notes. The $100 bill is home to the Mohua, Yellowhead, a small bird that is endemic to New Zealand and only lives in the South Island. This bird would have been abundant during the 19th century however introduced species of rat have caused a dramatic decline of the species and they are now a protected and threatened species that are found most commonly in the Caitlins National Reserve in the South Eastern corner of the South Island.

In the background of the note there is a picture of the Eglinton Valley which is in Fiordland on the drive towards Milford Sound. We make a stop here for photos on our tour in the South Island and it's definitely a good one to tick off the New Zealand bucket list.

Our next note is the $50 bill that fills the gap between the $100 and $20 bills. On the front there is a picture of Sir Apirana Turupa Ngata who was a Maori politician and lawyer who was a member of parliament for 38 years! In his early life he became the first Maori to gain a degree at a New Zealand University and also became the first New Zealander to gain a double degree from New Zealand University. He started making a name for himself in politics and was involved in writing legislation that would improved legal rights for Maori. He was heavily involved in trying to protect and maintain Maori culture using song, sport, building meeting houses and increasing the use of Maori language.

Also on this bill is the Kokako, another New Zealand native bird that has a North Island and South Island species although the South Island Kokako is presumed to be extinct. The species is considered endangered and there are thought to be less than 400 breeding pairs in existence with the Te Urewera National Park in the North Island having the largest population.

In the background of the notes is the Pureora Forest, one of the North Islands largest tracts of native forest which is home to a diverse range of native plants and animal life. 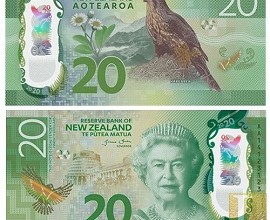 Queen Elizabeth II appears on the $20 and although New Zealand has been an independent country for a long time there are still many things about New Zealand culture that have trickled down from having a British Colonial past. Queen Lizzy has been the Queen of both Britain and New Zealand since 1952 however she has no power of the countries decision making or political situation. The British Empire has obviously fragmented significantly over the years becoming the commonwealth of nations and eventually seeing many countries becoming independent but the British we definitely a huge part of New Zealand's history and so the Queen remains on the currency.

On the reverse side of the note there is a picture of a Karearea, New Zealand Falcon. New Zealand's only Diurnal (awake during the day) native bird of prey. It is the countries most threatened bird of prey and is often mistaken for the more common Swamp Harrier. They are more common on the South Island and would be rarely seen in the northern part of the North Island.

The background of this note shows the New Zealand Parliament buildings next to Queen Elizabeth which you can see in Wellington and next to the Karearea is a picture of the highest peak of the Inland Kaikoura ranges on the South Island, Mt. Tapuaenuku which stands at 2885m high! 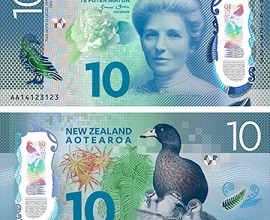 In 1893 New Zealand became the first country in the world to give women the vote. The most prominent member of the Women's suffrage movement was Kate Sheppard who campaigned for many years to get women the vote and this had a dramatic impact on suffragette movements in many other countries! That is why you'll find her picture on the $10 bill.

On the reverse side you'll see the Whio, Blue Duck. This is another endemic species of New Zealand bird whose name is a reference to its call and pronounced 'fee-oh'. The species is another under threat from introduced species and their numbers have been in decline although there are a few well funded projects to mange these populations and increase their numbers. 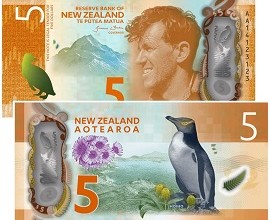 On the $5 bill there is a tribute to the great New Zealand outdoors and one of the most famous New Zealanders, Sir Edmund Hillary, who in 1953 became the first person to climb Mt. Everest. He was an mountaineer and explorer long before he set his sights on Everest and used mountains in New Zealand to help train for his ascent of Everest. He also became the first person to reach both the North and South poles and climb Mt. Everest. After climbing Everest he set up the Himalayan Trust which was aimed at helping Nepalese families, his achievements led to him being voted in the top 100 most influential people of the 20th Century by Time magazine.

On the back of this note you'll find the Hoiho, Yellow-eyed Penguin. This penguin is unique to New Zealand and is one of the worlds rarest penguin species. It is possible to see these little birds when we travel to the south-east of the South Island on tour as there are breeding colonies here although unfortunately these awesome penguins are an endangered species whose number are in significant decline.

Behind Sir Edmund Hillary you'll see a picture of Aoraki/Mt. Cook, New Zealand's highest peak which stands at 3724m high and was a mountain Sir Edmund climbed himself. We visit the Aoraki/Mt. Cook National Park on our tours to the South Island and is an awesome sight on a clear day. Behind the Hoiho is an image of Campbell Island, a remote island that has a rocky and barren landscape but is an important breeding ground for the Southern Royal Albatross, the Island is a UNESCO World Heritage site. 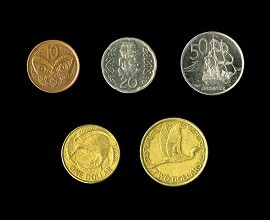 New Zealand coins are split into five different sizes and each coin has its own unique engraving. All the coins show Queens Elizabeth II, similar to the $20 this is a remnant of New Zealand's colonial past however the front of the coins depict all things New Zealand.

The $2 coin shows an image of the Great White Egret known in New Zealand as a Kotuku. It is a common bird in Australia and in other areas of the Asia-Pacific but in New Zealand it is only found on the West Coast and its breeding ground is centered around the small lagoon of Okarito. We visit the small town of Okarito as we make our way up the South Island's West Coast and it is possible to see the Kotuku however it is still quite rare even though this its only breeding area.

The $1 coin has the most famous New Zealand birds, the Kiwi! The fuzzy, flightless bird has become world famous and an international icon for New Zealand and so we have it pride of place on the dollar coin!

Our 50c coin shows an image the ship, The Endeavour. The HMS Endeavour was the ship that Captain James Cook commanded during his voyage of discovery between 1769-1771 where came across Australia and New Zealand.

The 20c depicts a well-known Maori carving of Chief Pukaki and the 10c coin has a carved Maori head known as a Koruru.